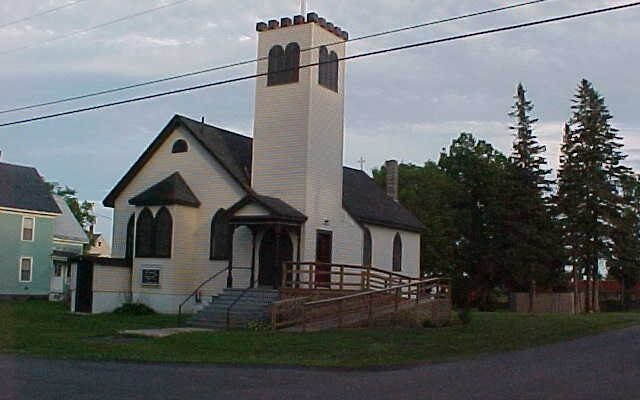 BROWNVILLE JUNCTION — When the Canadian Pacific Railroad line through Maine was completed in 1888, workers on the railroad included local men and many from Canada. Some had come years earlier to help build the railroad and the accompanying structures; some came to work on the trains, the first of which rolled into Henderson, as the town was known then, at 7:50 a.m. on June 3, 1889.

The village as laid out by Eder Henderson developed and plots for houses and businesses were purchased; the railroad men from “away” brought their families to join them in Brownville Junction. This, of course, meant schools and churches, as well as many other businesses, were needed.

As many of the families who came from Canada belonged to the Anglican Church, the early services held in the Junction were Episcopal. Church historian Susan Worcester reports that the first service was held “on Sunday, Nov. 23, 1890 in the schoolhouse which was then north of Rolfe’s Brook and was conducted by Rev. Henry Hudson, a curate of St. John’s Church, Bangor, who came to Henderson for Sundays and sometimes remained a few days for pastoral visiting.” Worcester also notes that there were times when the services were held in a boxcar, if one was available, or inside the CPR station.

It wasn’t long before the citizens wanted to erect a church building so land was purchased for $100 from Eder Henderson in 1891 on the corner of Henderson Street and Center Street for said church to be erected. The Episcopal Diocese of Maine pledged $400 toward the building of the church if the congregation could raise $100. Funds were raised quickly and the church building went up in record time, it would seem, as church records show that Bishop Rt. Rev. Henry A. Neeley, D.D. came to Henderson for the dedication of said church on Dec. 6, 1891.

The congregation continues to hold services at the church and Dec. 6, 2021 marks the 130th anniversary of that dedication.  Other than a required break from services due to COVID-19 in 2020, there has been an ongoing Episcopal presence in the community since those early days. While the congregation in the late 1800s and early 1900s was quite active, today the congregation is small. A problem found in many of our churches today.

Those who attend are dedicated to keeping the church open for all who wish to attend and will continue to serve God in these rural communities. Services are held every Sunday at 10 a.m. Standard Time (and 9 a.m. Daylight Saving Time) and all are welcome. For more information about the church, contact Worcester at 207-965-8070 or visit the church’s Facebook page.