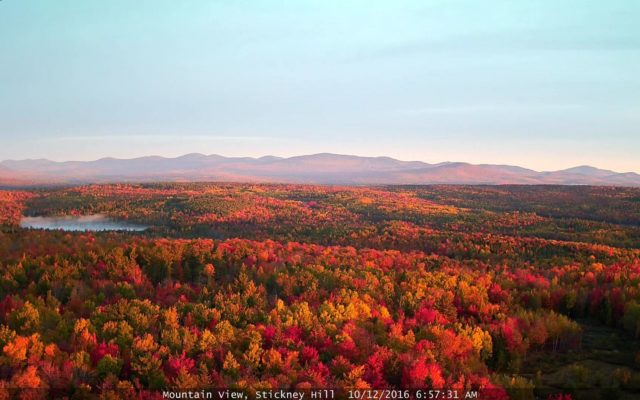 Piscataquis County webcams attract viewers from around the world

More than 20 cameras set up around rural Maine to connect overseas military personnel or others who have moved away with their hometowns are seeing even more use.

The nonprofit site threeriverscommunity.me hosts the webcams, which capture everything from traffic passing through downtown Milo to the three rivers — Piscataquis, Pleasant and Sebec — that converge on Eastern Piscataquis County, highlighting several of the area’s hotspots in real time.

Sunrise at Norway Point along Schoodic Lake, the north country from atop Stickney Hill in Brownville and the Brownville Food Pantry for Deer are popular sites available through the Three Rivers Community website.

“Looking at our traffic logs, the webcams are the most popular pages on our website,” Seth Barden said. Barden was a sophomore at Penquis Valley High School in 1996 when he began developing the site and today serves as its director and webmaster. “You’d be surprised. There are people all over the country that have some tie back to Milo who love watching those cameras.”

But the webcam project — as well as information ranging from local government news to public service announcements, a community calendar and a local directory — reaches a much larger audience, from military personnel serving overseas who are homesick for Maine to people who have moved away either permanently or seasonally.

Webcam manager Mike Russell, who installs and maintains cameras not only directly for the Three Rivers Community effort but also at other locations whose views are available on the site, sees the website and its familiar views serving an additional purpose amid the coronavirus.

“Right now there’s a lot of older people who are home who can’t get out and travel, they can’t go do anything and they love to get on their iPads and phones or computers and look at these webcams to see what’s going on around town,” he said. “It’s probably even more popular now because of this COVID.”

Fred Trask, an insurance agency owner and former county commissioner from Milo who has purchased webcams for the site over the years, recalled one local man who routinely found solace in the webcam views while serving overseas in the military a few years back.

“He spent a tour over in Afghanistan, I think, and when he got back he came and thanked us because the webcams brought some peace to his life because he could get on the internet and see what was going on in his hometown,” Trask, now a member of the website’s advisory board, said.

Among the more popular live streams are the six webcams focused on Richard McMahon’s efforts to feed hundreds of local deer in Brownville each winter for the last two decades.

“That sparks a lot of interest,” said Russell of the deer-feeding video stream, which also is available on YouTube. “People from all over have watched it, from more than 100 different countries.”

Another familiar webcam is a look off to the north from the top of Stickney Hill in Brownville, which has become a familiar site on local television weather reports.

That camera is situated atop a 200-foot-tall tower Russell owns on top of Stickney Hill, and perhaps is most popular during the foliage season when it captures the kaleidoscope of colors as summer turns to fall in the northern Maine forest.

“People like that camera because it’s got such a view of the wilderness and the sky,” Barden said. “It’s really good for a weather camera.”

Four other webcams are situated at Schoodic Lake — including one at the boat landing in Lake View — as well as another camera on Ebeemee Lake and others trained on the area’s three rivers.

The first webcam was purchased for the site by Trask in August 2004 and installed at his business, Trask Insurance on Main Street in Milo. A second webcam was added in October 2008 and placed at the same location, with the first webcam moved to Brownville.

A third webcam was installed on the south shore of Schoodic Lake in Lake View Plantation in July 2010, and 11 new webcams — all purchased by Trask — subsequently were installed around the area by Russell and his Atkinson-based ProTech Solutions, a high-speed internet company.

“We did it mostly around Milo because there are a lot of people that travel and go to Florida during the winter and they can log on and see what’s going on around town,” Russell said.  “They’ve also helped the police solve some cases. We’ve caught some images that have been helpful to them.”

Three Rivers Community now has more than 20 webcams providing views of the region, with other webcams administered by Russell also available on the website.

“Having the cameras just improves our base and then everybody can have a choice of what they want to look at,” Trask said.