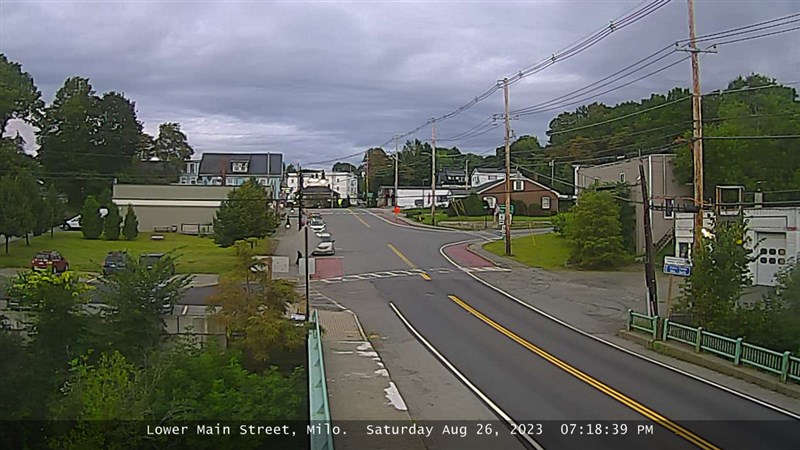 MILO — Two flags flown over Baghdad and Afghanistan on anniversaries of Sept. 11 and had been on display at the Marion C. Cook School in LaGrange are now part of the Veterans Wall at the Penquis Valley School. Penquis Valley High School National Honor Society students installed the flags and accompanying certificates on Thursday, Nov. 5 to ensure everything was in place leading up to Veterans Day.

LaGrange resident Joe Baker, a 1990 Penquis Valley graduate who will reach 30 years serving with the Air National Guard next month, wrote letters back and forth as penpals with Cook School students in MaryLynn Kazyaka’s classes when the facility served as an elementary school. Pupils also sent Baker pictures they took with a “flat Joe” and standup image of him.

Baker has worked in HVAC and fire control and maintenance, currently is firefighter at Bangor International Airport and he will be deployed next year. He taught fire safety at the Cook School so the students knew him well.

“Joe has always given a lot to our community and has served our country for many years,” Kazyaka said.

Under Baker’s leadership, one flag flew over Baghdad International Airport on Sept. 11, 2009 and the other flag flew over Afghanistan on Sept. 11, 2011. Since the Cook School closed as an elementary school in 2013 Kazyaka  — who now teaches at Penquis Valley Middle School — carefully stored the flags at her home.

She asked the National Honor Society to organize a display for the two flags. “I’m so glad you will take good care of the flags and certificates. They hung proudly in the Cook School until the very last day,” Kazyaka said.

More than 700 acres of Wabanaki Territory in Piscataquis County have been returned to the Penobscot Nation through a land stewardship agreement, the tribe said in a joint statement with the Elliotsville Foundation Friday afternoon.

The land is located in Williamsburg Township — west of Brownville — and sits between two parcels already in the Penobscot Nation’s stewardship.

The 735-acre parcel comes from the Elliotsville Foundation, which owns 125,000 acres of timberland throughout northern and central Maine.

“Through this gesture, Elliotsville Foundation has shown its commitment to strengthen and honor their relationship with the Wabanaki Tribes and recognize our long-standing cultural connection with the land and water,” he said.

John Banks, the tribe’s director of natural resources, said the land and neighboring Pleasant River — which is a tributary of the Penobscot — is “sacred ground to many people.”

“For the Penobscot people, this return expands our existing land base and also actually extends between, and connects, two of our existing Penobscot Indian Territory tracts, making both more accessible,” he said.

Lucas St. Clair, representative of the Elliotsville Foundation, said that he was compelled to “use his platform to tell a different narrative,” after learning about Maine’s history of land ownership and its relation to the state’s indigenous people.

“I learned the Wabanaki believe that they belong to the land and the western perspective is that land belongs to individuals and this is at the root of the misunderstanding of the way we treat land in Maine and around the country,” he said.

St. Clair said the foundation hopes to show confidence in Maine’s Native communities and the Penobscot Tribe as sovereign nations that can take on the responsibility to steward the land.

“While this is not the start or the end of a long journey of [reparations], it is what I can do now and what I hope to do more of while encouraging others to join us,” he said.

The Elliotsville Foundation is also part of First Light, a group that aims to “learn the history of Wabanaki land dispossession and to work together to expand Wabanaki presence in and relationship with their ancestral territory.”

“This is just the beginning of long work at making amends in real ways,” First Light Representative Peter Forbes said.

“After 350 years of colonization, the Wabanaki in Maine now have access to less than 1 percent of the land that once supported their place-based cultures. Maine’s rivers and mountains may carry some Wabanaki names, but the people and the stories that those names belong to have been relegated to small reservations out of sight to most Mainers.

“In the last 50 years, land trusts in Maine have come to work on [or] have relationships with almost 23 percent of the land in the state, which includes countless places of great importance to Wabanaki people and once stewarded by them. First Light exists as a bridge between conservationists and Wabanaki people to reconcile this history by expanding Wabanaki presence and relationship with their territory that we now share together.

“This is good for all of Maine,” he said.